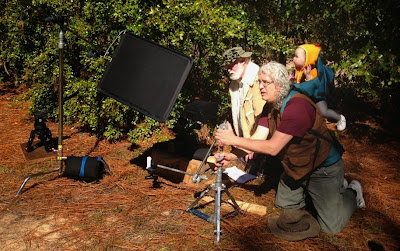 Why are you not shooting a short film?  You’re a filmmaker.  You have a camera, lights, editing, and have actor friends.  You have talent.  So this weekend, shouldn’t you be on location somewhere shouting, “ACTION”.

I know, you’ve got...excuses, reasons why you’re not saying ACTION this weekend.  However, in my opinion, the problem is: you don’t have an idea that moves you, compels you to put other things aside, (hire a baby sitter if needed), and shoot your film.

Belief in an idea compels action.  So, the trick is to create a film idea worth your belief.  I’ve been teaching high school students to produce short films since 1997.  For years, in the first week of Cinema Production class, I’ve watch young, smart, talented, creative people sit dumb-founded, mute when I ask the simple questions:

After a few years, I realized the problem: My students creative potentials’ needed a jolt.  So at the start of the next summer, I assigned the next year’s Cinema Production students to each compile their own “Idea Spark Book”.  The “Spark Book” is a collection of papers of ideas of anything that could help you, or a friend, create an idea for a film.

At first, my juniors and seniors were skeptical, but two months later at the start of the new school year, their ideas flowed like water.  Their films were applauded, winning numerous “Awards of Excellence” at the International Student Media Festival.  It was our best year ever, to that point in time.

The following year, we decided to increase our number of winning films and videos.  We calculated how many ideas it took to create one winning production.  We remembered all the failed pitches and productions that did not win, and we got our winning number...11.  For every 10 ideas that failed, 1 idea became a winner.   It was the year 2010, and we had stumbled upon what I would only recently learn that the famous sales trainer Grant Cardone has entitled, “10X” your goals.

In 1997, my mistake was in asking my students if they had one idea.  Since 2010, I told my students to pitch 11 ideas, and each year we produced a greater quantity of quality films than the year before.  Except...for this past school year, 2014-2015.  I slacked off a bit.  I didn’t give the idea “Spark Book” summer assignment.  I told students to make only 5 pitches.  The Senior students who made the idea book the prior year produced some stellar short films, but my department’s overall results were not as strong as the year before.

A few months ago, I channel surfed across Grant Cardone on YouTube talking about 10X.  Grant perfectly described the effects of my assignment decisions.  I tell you that in my experience, 10X works for creativity.
____________________

So, for my current Cinema Production 1 & 2 students and anyone who wants to increase their ideas for short films:

1 - Your goal / grade for the end of the second week of school in August is to pitch me 15 ideas for short films.  You can read the grading rubric in one of my earlier blog posts.

2 - To enable your creativity, your assignment in June and July is to build and fill your own idea “Spark Book”.

DIRECTIONS for How to make your own “Spark Book”

The Cover
For the cover, you can use a binder, a photo album, or you can make the Spark Book yourself: try ripping cereal boxes and stapling them together.  Surprise me.  The less you spend on it the better, or you can spend money on something more business like.  Just get it done.

The Pages
You need to be able to fill your book with a piece of paper for every “idea” item you find.  Important - don’t permanently bind the pages.  It should be easy for you to rearrange and add to your pages.  The rule is: one idea per page.  1 idea = 1page.

Four Types of Idea Content to include in your “Spark Book”

1 - Things that pique your interest, catch your eye, make you laugh, make you nervous, etc.  What are your friends talking about?  Rip a page from a magazine you’ve bought.  Copy and paste something of interest or strange from the internet.  What are the kids talking about?  Take a screen capture and print your friends’ Facebook pages that present emotions, struggle, and accomplishment.  Illustrate your responsibilities, stresses, goals, loves, and desires with some form of pie graph with cut-out pictures.  If you have chores or employment, take a picture of it and print it, even if you hate taking out the trash or washing dishes, include it.   If you read a newspaper story that makes you say “wow” buy it, rip it, and paste it.  Find some info about someone you admire.  Add a few pictures from your vacation.  Learn something new and include a few pictures about it.  Take something from the bulletin board of a coffee shop.  Grab a business card from a counter.  Take a picture of a cool spot in town. Include one printout of a famous work of art (not the Mona Lisa).  Write a few brief descriptions of some things that happen to and around you this summer.   Etc, etc, etc.

2 - Things that are seriously NOT you.  What do I mean?  These are things that should be in someone else’s book.  I’ll let you figure this out.  Include a few of these items.

3 - Things you find abhorrent that are serious and write down why you hate them.  For me, I remember the story of the sinking Korean Ferry boat loaded with families and high school juniors on a school trip.  The Captain ordered them wear life-jackets and remain in their cabins while he tried to keep the ship from sinking.  The Captain could never admit defeat.  He walked off the top of the boat, now at the waterline, into a rescue vessel, as the families and students drowned in their rooms.  I hate this for two reasons.  I hate that it happened, and those people died.  However, I also hate that a population could all be so obedient they followed orders over common sense.  I love my rowdy and rude American kids.

4 - Things you find abhorrent that are trivial, such as a picture of a grown man who wears clothing similar to that of a 9-year old boy.

At the Start of School in August:

To my current students
Bring your idea “Spark Book” with you on the first day of class.  You will be given a test grade for getting it done.  What is done?  Come on, you know what “done” means.  Please have it together.  Don’t ask me for scissors and tape like first grade.  We will be working with the books within the first 15 minutes of class.

To my blog readers
In August, I will make blog posts of the daily questions and activities I will present  to my students.  You can follow along on your own and see if it works for you.  I give you  no promises or guarantees.  If you take on the assignment, you do so at your own risk.
____________________

About that baby sitter
In the picture above, I’ve got my daughter Roxanne strapped to my back in a baby carrier.  I was entering the Doritos Super Bowl commercial contest.  We had planned to shoot the EXT on Saturday; my wife had the day off.  The weather forecast was sunny and warm.

It snowed and rained.  We moved the EXT to Sunday.  My lead female actress was not available.  My wife had to work.  My regular baby sitters were not available.  Fortunately, the AD knew a hot red-head.  Maybe Roxanne’s first word will be “ACTION”.

Don’t you want to say “ACTION”.

PS
Remember the first 3 rules of any shoot are: safety, safety, and safety.
Posted by @Film_Teacher at 5:05 PM No comments:

Looking to start or improve your YouTube page?  This page is great.

As I seek to expand my High School Film Teacher Blog with instructional videos, I’ve been reading and watching a lot of web content about YouTube Channel creation.  This page by www.Brafton.com is worth your time.

Posted by @Film_Teacher at 7:39 PM No comments: